For easy calculation you can display prices in your currency: 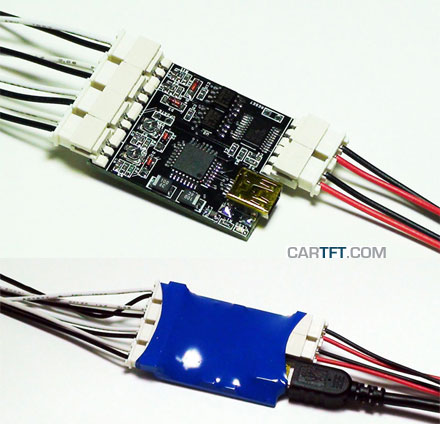 - No external power or driver installation needs.
- Available OS : Windows 7, Vista, XP, 2003
(JoyCon Explorer supports Windows XP and the later version. JoyCon Explorer does not support Linux. But CarPC JoyCon Exr works on Linux and Mac after it is configured at Windows.) This is the typical resistance-output steering wheel remote controller's circuit.
You can put additional buttons like green box below by DIY, if you want. You can control two external LED. Jex Cam shows when reversing light is detected.
Any video capture device can be rearview camera.
Horizontal and Vertical Mirror is supported. How to use Steering wheel remote controls in Centrafuse

and many other cars with resistive steering wheel controls What is different Exr from Ex?
Exr is almost same with Ex.

In the previous EX version, user had to desolder the diodes on the PCB manually to use slave mode.

And Exr has an extension port for future upgrade.

Please tell us your opinion. Rate the product on a scale from 1 to 5. A value of 5 means the best possible rating. If you want you also can leave a comment.

Your ratings are honored on many ways. Your report will help other customers to better judge about the products. And you can benefit from reports other customers are giving.

We reserve us the right to delete given comments (for example on attempts to give comments with senseless content, copying of other comments, inserting of foreign content, abusing the system for financing orders). "Fair-use-policy" does apply (as of rule of thumb you should give comments for products which you have purchased already. And your credit account only in rare cases will have 2 or even 3 digits). The credit can only be withdrawn by placing an order. It is not possible to get the credit cash or transferred in an other way.

| See all my comments

Works perfectly with my Suzuki Grand Vitara -13.
Make sure you get the right pins from the harness, and have patience with the graphical configuration tool because it is far from intuitive, other then that I have no complaints, I love that each button may also have a long press which means I have double the amount of "buttons" on my steering wheel now :)
/Andreas

| See all my comments

(Depending on weight the charges for "Worldwide" can be higher. You can see final rates in the shopping cart.)